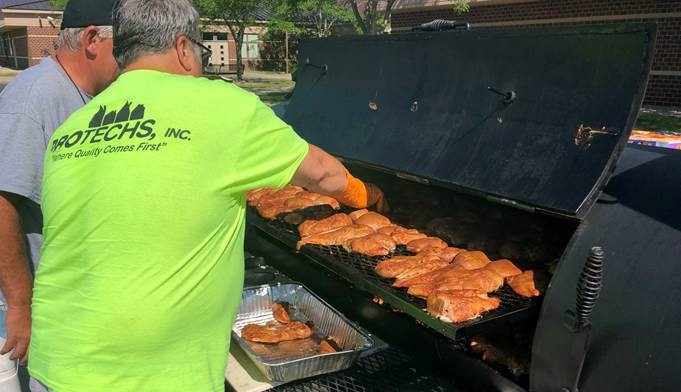 Fort Wayne, Ind. (WANE) – Northeast Indiana is giving back to the flood victims in Texas. Several local charities and businesses are doing everything they can to provide relief.

A local disaster response company is packing up and heading to Houston to help restore homes and businesses damaged by Hurricane Harvey. Protechs Inc. has done restoration work all over the country, including working in New Orleans for Hurricane Katrina.

The company will send a dozen people to meet up with four other companies from the Midwest who specialize in disaster clean up. They are tasked with dry out 75 million square feet of water in buildings. They have packed more than 100 pieces of equipment are prepared to restore as many as 150 structures.

“It’s not through yet but we want to get down there,” said Joe Clark, who is Operation Manager at Protechs Inc. “Based on what we’re hearing its a horror story.”

“People are concerned,” said Wolf. “That’s the great thing about people in this community. They always help out and help their neighbors. Everyone sees the devastation.”

The Salvation Army is also collecting food and other donations for people in Houston. The organization has a national network of trained disaster staff and volunteers and a fleet of more than 500 mobile feeding units that can be deployed. They plan to send 42 mobile kitchens and two field kitchens to Texas. The kitchens can serve an average of 1,500 meals per day.

Fleet Feet Sports is accepting donations of new or gently-used running shoes and new socks to send to stores in Texas. The donations will then be distributed to organizations that help people in need.

Austin Kemp is a Houston native who attends Indiana Tech. He said the pictures and videos of Hurricane Harvey’s aftermath is devastating. Although he is more than 1,000 miles away, he is working with faculty and students to come up with a way to raise money to help.

Kemp said he’d like to see people in Fort Wayne donate to the J.J. Watt Foundation which has already raised more than a million dollars. Kemp said the outpouring of support keeps him optimistic in the face of tragedy.

“It’s a devastating time for the city of Houston,” he said. “But my community is strong.  We’re going to get through it.”

Some in the area are also making sure victims’ stomachs are full. Employees at Lucille’s BBQ in Fort Wayne hit the road Tuesday with a large smoker. They’ll join dozens of other BBQ joints and partner with Operation BBQ Relief to serve 400,000 meals in the Houston area.

More than 150 volunteers showed up in Bluffton to pack boxes with food that will be shipped to Texas. The Harvest Call Distribution Center there teamed up with Midwest Food Bank and the Salvation Army to send boxes of food to victims. Volunteers packed more than 750 boxes in less than a hour.

THE SITUATION PROTECHS INC. was contacted on Christmas morning by Huntington Community Schools Corporation because a classroom at an Elementary Schools in their district had caught on fire.  A PROTECHS’ Senior Manager was immediately dispatched to the location to scope the damages. THE PROBLEM The fire was contained to one classroom, thanks to a … END_OF_DOCUMENT_TOKEN_TO_BE_REPLACED

Propane and charcoal BBQ grills should only be used outdoors. Never leave your grill unattended. Keep children and pets at least three feet away from the grill area. The grill should be placed well away from the home, deck railings and out from under eaves and overhanging branches. Keep your grill clean by removing grease or … END_OF_DOCUMENT_TOKEN_TO_BE_REPLACED

Several of the wrong kind of companies recently decided to add coronavirus cleaning, sterilization, disinfecting or decontamination to the services they provide.  Pest Control, Carpet Cleaning, and Janitorial Companies started receiving calls about “fogging” and “deep cleaning” and saw dollar signs so they equipped their uncertified staff with a pump-up sprayer and some disinfectant … END_OF_DOCUMENT_TOKEN_TO_BE_REPLACED

×
Share this ArticleLike this article? Email it to a friend!
Email sent!